A Verkle tree is a commitment scheme that works similar to a Merkle tree, but has much smaller witnesses. It works by replacing the hashes in a Merkle tree with a vector commitment, which makes wider branching factors more efficient.

Thanks to Kevaundray Wedderburn for feedback on the post.

For details on how verkle trees work, see:

The aim of this post is to explain the concrete layout of the draft verkle tree EIP. It is aimed at client developers who want to implement verkle trees and are looking for an introduction before delving deeper into the EIP.

Verkle trees introduces a number of changes to the tree structure. The most significant changes are:

The curve we are using is Bandersnatch. This curve was chosen because it is performant, and also because it will allow efficient SNARKs in BLS12_381 for reason about the verkle tree in the future. This can be useful for rollups as well as allowing an upgrade where all witnesses can be compressed into one SNARK once that becomes practical, without needing a further commitment update.

Layout of the verkle tree

One of the design goals with the verkle tree EIP is to make accesses to neighboring positions (eg storage with almost the same address or neighboring code chunks) cheap to access. In order to do this, a key consists of a stem of 31 bytes and a suffix of one byte for a total of 32 bytes. The key scheme is designed so that “close” storage locations are mapped to the same stem and a different suffix. For details please look at the EIP-draft.

The verkle tree itself is then composed of two types of nodes:

C₁ and C₂ are two further commitments that commit to all the values ​​with stem equal to stem. The reason we need to commits is that values ​​have 32 bytes, but we can only store 252 bits per field element. A single commitment would thus not be enough to store 256 values. So instead C₁ stores the values ​​for suffix 0 to 127, and C₂ stores 128 to 255, where the values ​​are split in two in order to fit into the field size (we’ll come to that later.)

The extension together with the commitments C₁ and C₂ are referred to as “extension-and-suffix tree” (EaS for short).

Figure 1 Representation of a walk through a verkle tree for the key 0xfe0002abcd..ff04: the path goes through 3 internal nodes with 256 children each (254, 0, 2), one extension node representing abcd..ff and the two suffix tree commitments, including the value for 04, v₄. notice that stem is actually the first 31 bytes of the key, including the path through the internal nodes.

Commitment to the values ​​leaf nodes

To circumvent this problem, we chose to partition the group of 256 values ​​into two groups of 128 values ​​each. Each 32-byte value in a group is split into two 16-byte values. SO A VALUE Vᵢ∈ ₃₂ IS TURNED INTO V⁽ˡᵒʷᵉʳ⁾ᵢ ∈ ₁₆ AND V⁽ᵘᵖᵖᵉʳ⁾ᵢ∈ ₁₆ Such that v⁽ˡᵒʷᵉʳ⁾ᵢ ++ v⁽ᵘᵖᵖᵉʳ⁾ᵢ = vᵢ.

A “leaf marker” is added to the v⁽ˡᵒʷᵉʳ⁾ᵢ, to differentiate between a leaf that has never been accessed and a leaf that has been overwritten with 0s. No value ever gets deleted from a verkle tree. This is needed for upcoming state expiration schemes. That marker is set at the 129th bit, ie v⁽ˡᵒʷᵉʳ ᵐᵒᵈⁱᶠⁱᵉᵈ⁾ᵢ = v⁽ˡᵒʷᵉʳ⁾ᵢ + 2¹²⁸ if vᵢ you have accessted Before, and v⁽ˡᵒʷᵉʳ ᵐᵒᵈⁱᶠⁱᵉᵈ⁾ᵢ = 0 if vᵢ you have denied Been access.

The two commitments C₁ and C₂ are then defined as

Unlike extension nodes in the Merkle-Patricia tree, which only contain the section of the key that bridges the parent internal node to the child internal node, the stem covers the whole key up to that point. This is because verkle trees are designed with stateless proofs in mind: if a new key is inserted that “splits” the extension in two, the older sibling need not be updated, which allows for a smaller proof.

where the Cᵢ are the children of the internal node, and 0 if a child is empty.

Insert into the tree

Figure 2 is an illustration of the process of inserting a new value into the tree, which gets interesting when the stems collide on several initial bytes. 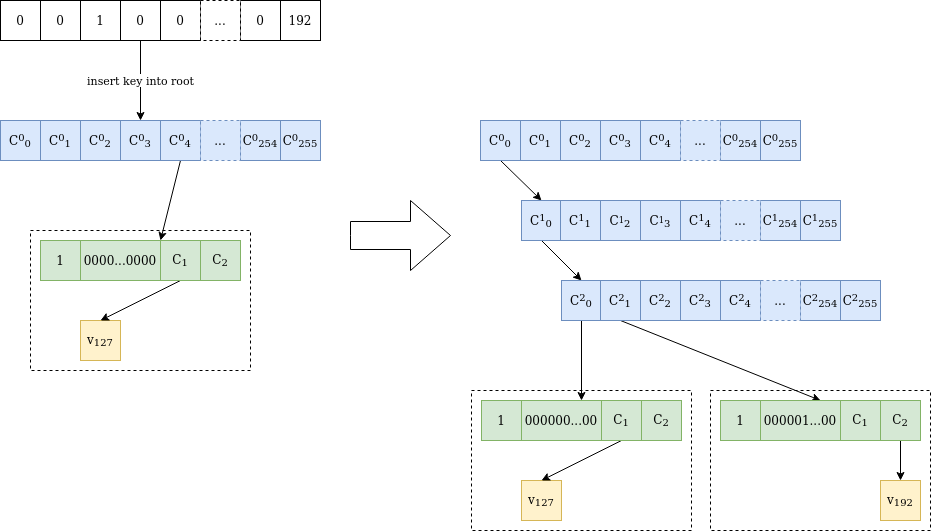 Figure 2 Value v₁₉₂ is inserted at location 0000010000…0000 in a verkle tree containing only value v₁₂₇ at location 0000000000…0000. Because the stems differ at the third byte, two internal nodes are added until the differing byte. Then another “extension-and-suffix” tree is inserted, with a full 31-byte stem. The initial node is untouched, and C²₀ has the same value as C⁰₀ before the insertion.

The verkle tree structure makes for shallower trees, which reduces the amount of stored data. Its real power, however, comes from the ability to produce smaller proofs, ie witnesses. This will be explained in the next article.