The great renaming: what happened to Eth2?

Ethereum is undergoing significant protocol changes. Client teams are upgrading the protocol to scale to meet global demand while improving security and decentralization. Beyond protocol development, a critical shift in Ethereum has been the movement away from ‘Eth1’ and ‘Eth2’ terminology. As of late 2021, core developers stopped using the terminology, preferring ‘execution layer’ and ‘consensus layer’, respectively. Today, as highlighted in our Q1 roadmap, ethereum.org makes the same shift.

Where did Ethereum 2.0 come from?

Ethereum always had, as part of its roadmap, plans to scale the network in a decentralized way Y a transition to proof-of-stake. Early on, researchers worked on these efforts separately, but around 2018 they were combined into a single roadmap under the “Ethereum 2.0” umbrella.

As part of that roadmap, the existing proof-of-work chain (Eth1) would eventually be deprecated via the difficulty bomb. Users & applications would migrate to a new, proof-of-stake Ethereum chain, known as Eth2.

The article The Roadmap to Serenity by ConsenSys explains how things stood as of early 2019.

As work began on the beaconchain, it became clear that the phased Ethereum 2.0 roadmap would take several years to deliver fully. This led to a revival of research initiatives on the proof-of-work chain such as Stateless Ethereum, a paradigm that would remove the untouched state from the network to bound its growth rate.

The increased focus on making the proof-of-work chain long-term sustainable paired with the realization that the Beacon Chain would be ready much earlier than other components of the Ethereum 2.0 roadmap led to an “Early Merge” proposal. This proposal would launch the existing EVM chain as “Shard 0” of the Ethereum 2.0 system. Not only would this expedite the move to proof-of-stake, but it would also make for a much smoother transition for applications, as the move to proof-of-stake could happen without any migration on their end.

Shortly after this proposal, Danny Ryan explored how we could accomplish this by leveraging the existing Eth1 clients in his Eth1+Eth2 client relationship post. This would massively reduce the development work required to deliver a post-merge system and leverage existing clients, which had been battle-tested for years on Mainnet. around the same time, research on roll-ups as a viable and secure way to scale Ethereum proved promising. Instead of waiting on a complex, uncertain scaling solution years away, we could shift the focus towards scaling via rollups instead of sharded execution.

Why can’t we just use Eth2?

One major problem with the Eth2 branding is that it creates a broken mental model for new users of Ethereum. They intuitively think that Eth1 comes first and Eth2 comes after. Or that Eth1 ceases to exist once Eth2 exists. Neither of these is true. By removing Eth2 terminology, we save all future users from navigating this confusing mental model.

As the roadmap for Ethereum has evolved, Ethereum 2.0 has become an inaccurate representation of Ethereum’s roadmap. Being careful and accurate in our word choice allows content on Ethereum to be understood by the broadest audience possible.

Unfortunately, malicious actors have attempted to use the Eth2 misnomer to scam users by telling them to swap their ETH for ‘ETH2’ tokens or that they must somehow migrate their ETH before the Eth2 upgrade.

We hope this updated terminology will bring clarity to eliminate this scam vector and help make the ecosystem safer.

Some staking operators have also represented ETH staked on the Beacon Chain with the ‘ETH2’ ticker. This creates potential confusion, given that users of these services are not actually receiving an ‘ETH2’ token. No ‘ETH2′ token exists; it simply represents their share in that specific providers’ stake.

How does this update change the Ethereum roadmap?

It doesn’t! It’s important to understand that this renaming represents a change in naming only. The features on Ethereum’s current roadmap (ie merge, sharding) and future features will still happen on the same timeline. More on the Ethereum upgrades.

The rebrand was a massive task with many content changes. There are likely instances we missed and improvements still to be made. Notice something that needs fixing? Raise an issue or open a PR on the ethereum.org GitHub.

As part of the great renaming, we’ve also updated the Ethereum Staking Launchpad (formerly known as the Eth2 Launchpad) to reflect the terminology changes. Please raise an issue or create a PR if we missed anything.

If you’re capable of translating content, we could use your help! We’ve updated this content in English, but our 40+ additional languages ​​are now outdated and still reference Eth2 terminology. Please consider getting involved.

We’ve updated our content buckets to include an Ethereum upgrades bucket. This will empower our hundreds of active contributors to the Translation Program to directly target these changes to publish the new accurate information across languages ​​more quickly.

Interested in helping to translate ethereum.org or the Ethereum Staking Launchpad? check out our translation program.

To many, ethereum.org is seen as a credible source of information maintained by our community. Understandably, many didn’t want to shift away from Eth2 terminology until ethereum.org did. We hope that our changes will encourage others to move away from the outdated Eth2 terminology. By doing so, you will be helping to create consistency and clarity across the ecosystem, allowing for more accurate mental models and making Ethereum more accessible. 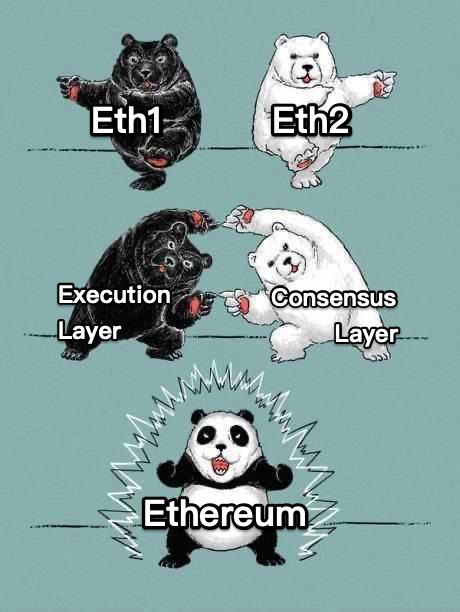 special thanks to Tim Beiko and Trent VanEpps whose writings were heavily referenced in this article.