Fears of a recession have kept many would-be renters on the sidelines, according to a new report from RealPage. Despite record demand in 2021 and ever-increasing rents, apartment demand has “evaporated” due to what RealPage reports as cooling in new household formation. Despite this, the apartment market overall remains robust with vacancy rates still sitting at record lows of 4.4% nationally in Q3 2022. 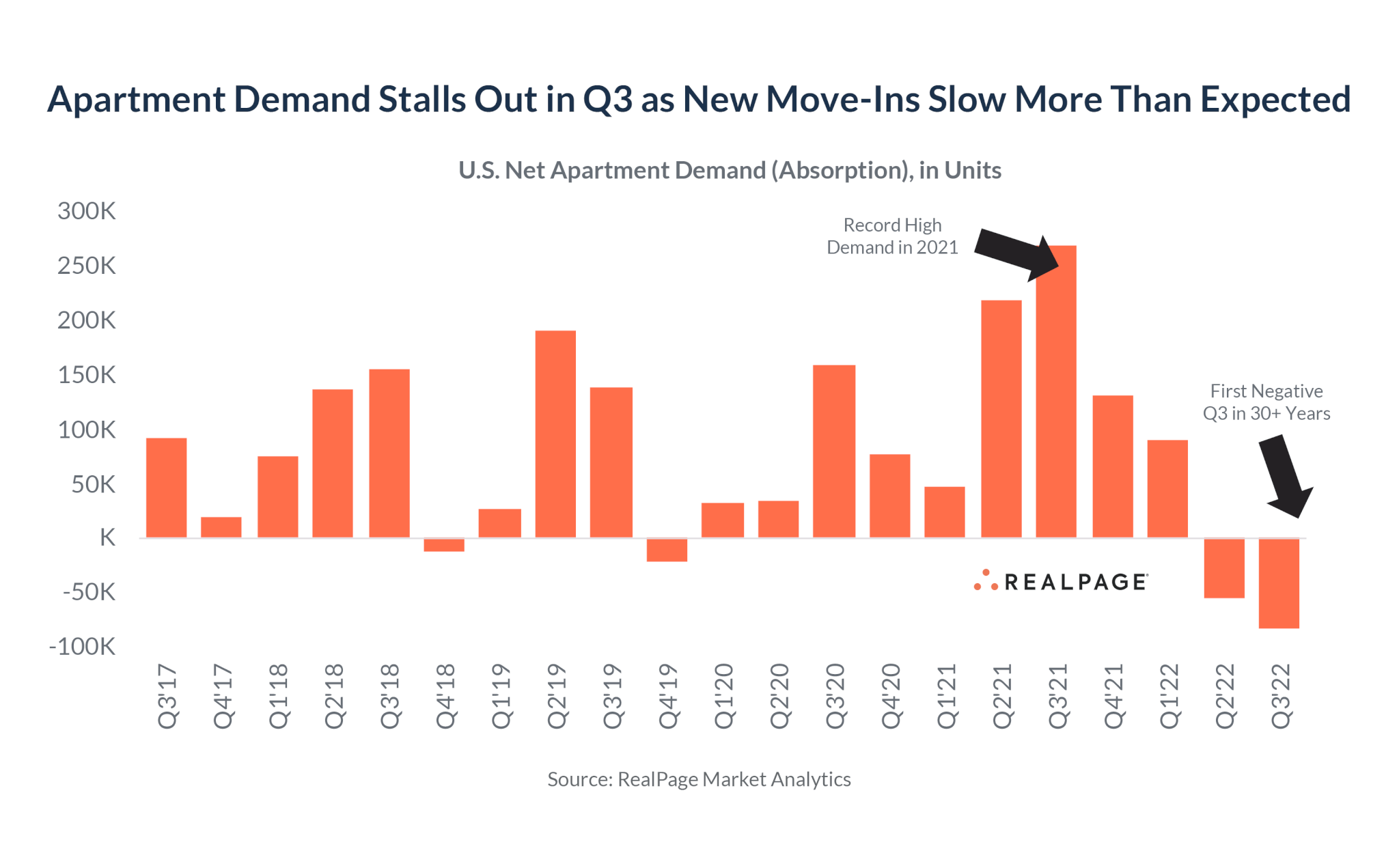 Generally a strong quarter, this was the first time in RealPage’s 30-year analysis that we witnessed negative demand in Q3.

Candyd Mendoza of MPA reports on Yardi Matrix data showing that asking rents are beginning to flatten to a 9.4% YoY growth ($1,718) down from 20% since January 2021. The report concludes: “The cooling economy is beginning to show its effect on multifamily…However, key fundamentals remain strong. Despite the flattening rent growth, much about the market remains positive. National asking rents are still at record highs, and national occupancy rates have been hanging around 96% since June of 2021.”

Last month, Freddie Mac released its Multifamily Apartment Investment Market Index, which registered negative in Q2 2022. The index dropped by 11.7% in Q2 2022, and is down 17.9% compared to Q2 2021. This decrease is driven primarily by rising interest rates, according to Freddie Mac. National multifamily NOI growth sat at 3%, with the fastest growth seen in Miami at 4.7%.

According to Steve Guggenmos, VP of Research & Modeling at Freddie Mac Multifamily: “Although higher rates and property prices have driven the index down, NOI growth remains strong. The drop in AIMI this quarter reflects moderating investment conditions brought about by changing trends in the broader economy. There still exists an overall housing shortage which is keeping vacancy rates low and rents high.”

A new report from CoreLogic sheds additional light on the damage to the real estate sector caused by Hurricane Ian. In all, it is estimated that there will be between $41-$70 billion in wind and flood losses from Hurricane Ian. Reportedly, over 66,000 pending mortgage applications worth about $22.5 billion are currently in progress in affected states, and “are in jeopardy from Hurricane Ian damages.”

According to Selma Hepp, interim lead of the Office of the Chief Economist at CoreLogic:

“Housing markets in Florida will face difficult times as many Florida residents have been impacted by the devastating storm…Initially, we are likely to see an increase in mortgage delinquencies as is typical following catastrophes. Also, rents are likely to jump as households who lost their home seek immediate shelter. Longer term, home price growth in hard hit areas is likely to lag that of the rest of the state and nation as people may opt to move to areas less prone to natural disasters. CoreLogic observed this trend in the Gulf Coast region following Hurricanes Laura, Delta and Ida.”

Indeed, Jarred Schenke of Bisnow reports that analysis by Trepp found that the debt market exposure to properties in Hurricane Ian’s path could be as high as $52 billion.

Antonio Olivo and Tim Craig of The Washington Post report on Florida specifically, outlining that rental prices will increase dramatically due to the new shortage of rentals as displaced Floridians as a result of the hurricane. “Housing experts say the scramble for new homes will likely drive up prices in an already overheated real estate market…In some areas of southwest Florida, homes not affected by the storm were still renting for as much as $5,000 per month, while two-bedroom apartments cost $2,000 per month.”

There’s also insurance to consider, with Becky Sullivan of NPR reporting that insurance premiums for Floridians was already rising dramatically faster than the national average (33% vs 9%).

“The fear is that such a massive payout from a single storm could be the final straw for companies already struggling to deal with the other challenges of doing business in Florida. If rates continue to rise by 30% or more, as they have done for many Floridians in recent years, some Florida homeowners may end up paying more for insurance than they do for their mortgage.”

In one positive sign for the economy, new jobs data points to an improving job market with hirings increasing and unemployment dropping. Lucia Mutikani of Reuters reports that employers hired more than expected in September, and the unemployment rate decreased to 3.5%. This strong labor market will likely keep the Federal Reserve on track to continue increasing rates in the short term.

That said, the job market in the real estate sector is anything but rosy, according to Taylor Nicole Rogers of the Financial Times (subscription required). Reportedly, brokers, realtors, appraisers, and construction groups have reported as much as an 80% drop in revenue since March when the Fed began raising rates. As such, “[r]ealtors, mortgage brokers and appraisers across the US are bracing for widespread job cuts as home sales plummet amid rising interest rates.” 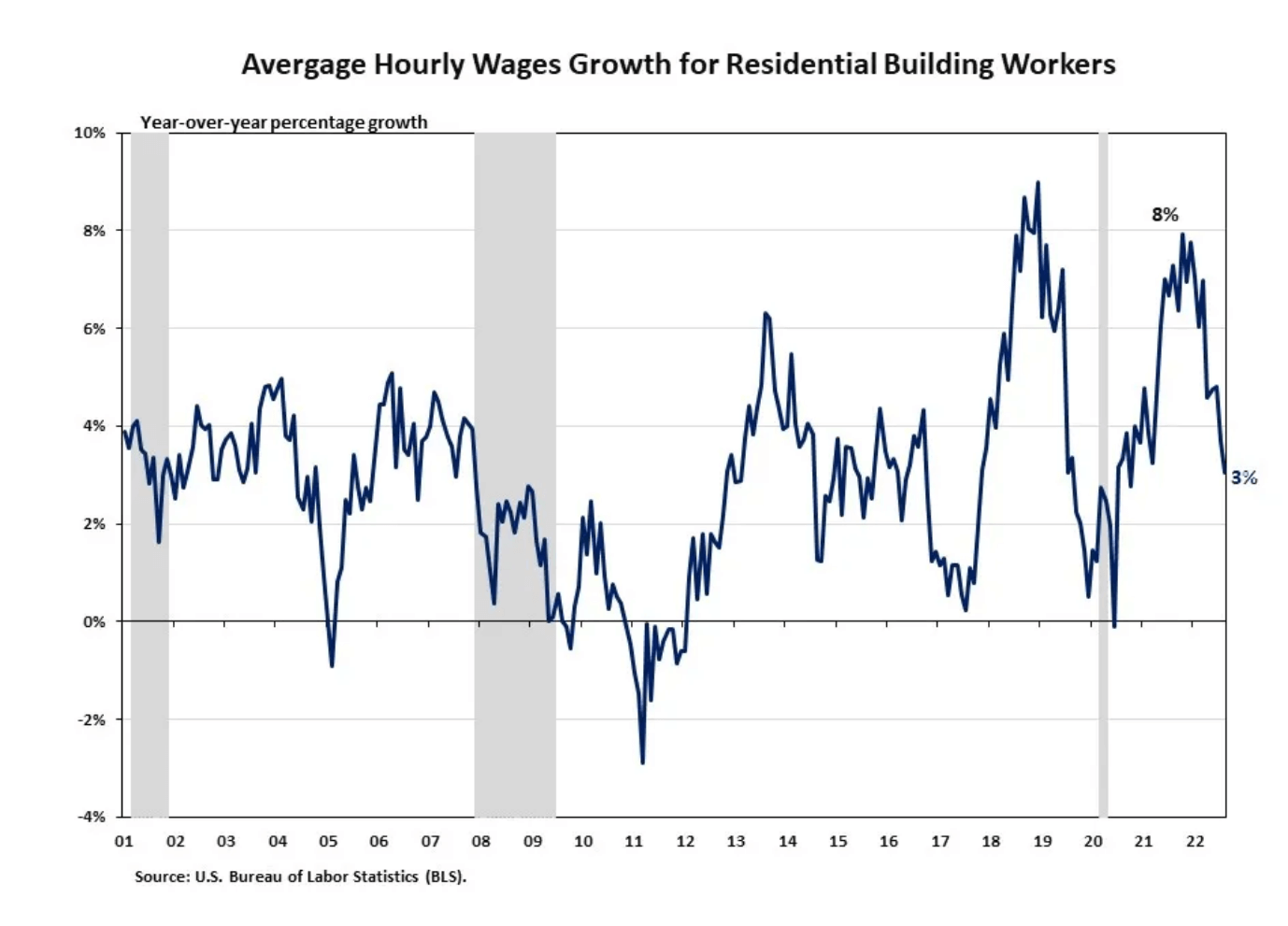 Finally, Micah Guiao of MPA quotes Mike Fratantoni, chief economist at the MBA, as saying that “[o]ther data clearly signaling a slowing economy lead us to forecast a sharp drop in job growth over the coming months…The unemployment rate dipped back to 3.5%, equal to the pre-pandemic low, and wage growth remains strong with average hourly earnings up 5% over the past year.”